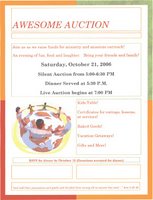 Another of his disciples, Andrew, Simon Peter’s brother, spoke up, “Here is a boy with five small barley loaves and two small fish, but how far will they go among so many?” Jesus said, “Have the people sit down.” There was plenty of grass in that place, and the men sat down, about five thousand of them. Jesus then took the loaves, gave thanks, and distributed to those who were seated as much as they wanted. He did the same with the fish. When they had all had enough to eat, he said to his disciples, “Gather the pieces that are left over. Let nothing be wasted.” So they gathered them and filled twelve baskets with the pieces of the five barley loaves left over by those who had eaten. John 6:8-12 (NIV)
I’m in charge of our Sunday School class’ auction this year. Sometimes, the thought throws me into a panic. This is not just any auction, but the main fundraiser for a class that spends about $10,000 a year on missions and ministry. I am not sure exactly how it happened. Our class’ web site said to call me for information, but I never volunteered to organize it. When I let our teacher know that I could not do it, she must have started praying right away that God would change my mind. Just a few days later, when our class wanted to support a ministry, but could not because all of the money raised last year was gone, I felt compelled to stand up and tell everyone that this just shows how important it is to support the auction. One word let to another and there I was again, in charge of the whole event. Never say no to your Sunday School teacher. Of course, I have plenty of experience supervising in my job, and well, let’s face it, my family. So, I divide up the responsibilities, and God has blessed our class with many who have agreed to take on leadership roles. Everything except registration is taken care of, so now my job is to motivate, encourage and find one more person to take on the registration table. But, I still wake up in the night and Satan teases me with the idea that the task of raising $12,000 (I did not set that goal!) is all on my shoulders. God is greater than the evil one who would just as soon see me try to do just that. For if I try to do anything in my own strength, it will certainly fail. Instead, God reminded me of the story of the feeding of the 5,000. I once had a professor who said that before reading a textbook, check the index to see what is mentioned the most often, and know that that is of greatest importance to the book. Since this story is found in all four of the gospels, God must consider it an important lesson for us to learn. First remember about the five loaves and two fishes that were multiplied into enough food to feed way more than 5,000 people (only the number of men were registered, so we must factor in the women and children, too.) Someone had to bake that bread and catch that fish in order for the miracle to begin. Then, think about the disciples. Sometimes we focus on what they couldn’t do, feed the large gathering, but after all, they did go out and search the crowd to come up with one little boy’s lunch. As humans, when we are called to participate in a God sized project, we must do what we can do. Bake the bread, catch the fish, put it in a basket and give it to our Lord. Then, stand back and watch Him work!

« Done What She Could
Moving Day »