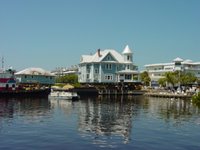 I know this may sound crazy to those who envision a dusty library and ancient papers, but being a historian can be an exciting job as I fight to save at least a part of our community’s heritage. As chief warrior in the fight to keep a rapidly developing area from completely forgetting the lessons of the past, I often watch sadly as historic buildings are destroyed. Today, we won a major battle. A large Victorian home, the Lamb House, built in 1910, now sits on a barge in the middle of a river awaiting a move twenty-five miles to its new home. This beautiful house, with its gleaming metal roof, blue painted cedar shake siding and whimsical round three-story turret was built by a member of a founding family. Just a few months ago, this three story wooden landmark appeared headed for demolition. Instead, some guardian angels worked tirelessly to move it out of harms way. The waterfront property where it has sat for almost 100 years will soon hold condominiums. The work to prepare for its move has been going on for many weeks. Hydraulic jacks lifted the building up and onto large wheels. Because the house was on the water directly across from a boat ramp, a tractor pushed the house across a street, and slid it onto a waiting barge. Its little guest cottage joined it on the barge, which was pushed by a tugboat out into the river. Tomorrow, it will leave the safety of the river, cross the open waters of a bay and float under a huge bridge until it arrives at its new site on another river in another county. Many moving companies would have cut the house into several sections, but the company in charge of the transport of this building chose to leave it in one piece. Once it is set upon its new foundation, it will be ready for restoration. In time, just as the house itself will be reborn, it will offer a place of rest and renewal for ministers. In the excitement of the day, I thought about how, someday, my body will also be reborn into a new life. Jesus died and rose again so that when I die, my life will not end, but will continue on as well. My spirit will not be in the same body that I occupy now, but a new one, much better than the one that this earth affords. Unlike the lengthy journey the Lamb House is taking, my moving day will happen in an instant. No waiting for traffic to clear, no worries about weather or tides, I will simply slide from one life into the next. I will miss seeing the Lamb House every day on my journey to and from work, but I know it will be loved and in good hands with its new owners. Someday, so shall I be, for death can no longer claim victory over me. Christ has won that battle already.