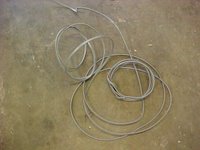 Jesus said to them, “If God were your Father, you would love me, for I came from God and now am here. I have not come on my own; but he sent me. Why is my language not clear to you? Because you are unable to hear what I say. You belong to your father, the devil, and you want to carry out your father’s desire. He was a murderer from the beginning, not holding to the truth, for there is no truth in him. When he lies, he speaks his native language, for he is a liar and the father of lies. Yet because I tell the truth, you do not believe me! Can any of you prove me guilty of sin? If I am telling the truth, why don’t you believe me? He who belongs to God hears what God says. The reason you do not hear is that you do not belong to God.” John 8:42-47

Tonight’s lesson in electrical engineering was how to keep the wires from getting all mixed together. I failed. Glen laid three coils of wire in a row and carefully taped the ends together. While he strung them through the conduit, I was to unwrap them from the coils and keep them straight as he pulled the three strands through to the other side. Then, he would glue another piece of conduit to the first. We had to put thirty eight-foot sections of conduit together. He told me to only unwind the wire from the outside of the coil. Unfortunately, he did not define outside, and I didn’t get what he meant. We made it through only four pieces of conduit before the carefully laid coils became all knotted up. We wasted the rest of the evening untangling the mess. Glen kept fussing; I kept apologizing, and the kinks got bigger and bigger. He would have thrown the whole mess away and bought more tomorrow except that it was very expensive. We had more time than money tonight so first angrily, then, patiently; we pulled wires apart until the strands were separated again. To get it done, we wove them in and out of each other, and pulled the lengths apart. Because we worked with more than three hundred feet of wire, I made many trips dragging wire far from the barn out into the field in the dark and through the high weeds and mud to pull it straight only to have to retrace my steps and unwind it once more. It made me think of what a mess we make when we don’t tell the truth. Our society tells us that a little “white” lie won’t hurt anyone. What is wrong with a fib or an exaggeration? But, no matter what we call them, they are all lies and come from the same place, the father of lies, Satan. Sometimes, his lies are so blatant that we cannot help but recognize them for what they are. Many times though, he takes a little truth and twists it to deceive us into believing it even though it is still a lie. Things like, “You are good for nothing,” even though God tells us that we are His special creation made for a unique purpose. Or “God can’t possibly love you because of who you are” when God tells us that nothing will separate us from His love. Sometimes, Satan plants the lies on our own tongues. Whether we are trying to get ourselves out of trouble or make ourselves look better than we are, lies take a lot of work to undo. It is important to recognize that God is the God of truth. Lies are contrary to Who He is and who we are called to be as His representatives on this earth. Learn to listen carefully for the truth. We save ourselves a lot of time and aggravation when we avoid getting tangled up in a lie.