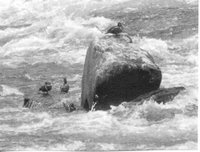 Wyoming is the place to go if you like to hike. The weather and temperatures are perfect for being outside and enjoying nature. Some of the paths took us up into mountains and down into canyons. One of our favorites started on the far side of Jenny Lake where, after cheating by taking the boat across the lake instead of walking around it, we climbed along a river, over several footpaths and beside waterfalls. It was rough going for some out of shape Floridians, but worth the view. We had to stop several times to catch our breath. I laughed out loud when halfway up the side of the mountain, we came across a sign that said, “No horses beyond this point.” All along the way, we saw animals such as chipmunks and birds. Glen even caught sight of a yellow-bellied marmot, which looked like a cross between a weasel and a beaver. Another trail took us along a flatter route beside the Yellowstone River. If we had been a little later in the summer, at this spot, we would have seen salmon leaping upstream to spawn. The water surged downstream spraying high up in the air. I could not imagine how those fish could cross that rushing water. There were no salmon, but these beautiful little ducks made quite a picture resting behind these rocks. They were bright colors of brown and green and stood out sharply against the almost gray colored water. Immediately, I thought of all the Scripture verses where Bible calls God, our Rock. Many times, we are told that we can rest in the shelter of the Rock. Some of the little birds rested in the eddy caused by the break the rock made in that fast moving water. They floated quietly as though they were on a serene lake instead of in the middle of the rapids. But, another duck caught my eye as well. He stood on top of the rock, almost daring the waves to knock him off his perch. Sometimes, when troubles come, God calls us to rest in Him, to escape from the turbulence and hide. But, other times, He asks us to rise in the midst of the turmoil around us. By standing firm and unwavering, we call attention to ourselves and cause people to ask, “What makes her or him so different? How can they remain so calm when the pressure is so intense?” Then, we have the opportunity to say, “It has nothing to do with me, and everything to do with the Rock upon which I stand.” Whether He has invited you to wait quietly in a secret place or whether He requires you to be a strong beacon for Him, like the little ducks, we need the wisdom to listen to our Creator and follow Him. He will give you the peace and courage you need to endure whatever comes. Even in the midst of a raging river, He will be our Rock.

« Guardrails
Beyond the Next Hill »