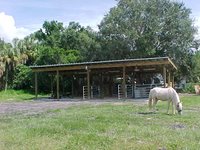 All these people were still living by faith when they died. They did not receive the things promised; they only saw them and welcomed them from a distance. And they admitted that they were aliens and strangers on earth. People who say such things show that they are looking for a country of their own. If they had been thinking of the country they had left, they would have had opportunity to return. Instead, they were longing for a better country—a heavenly one. Therefore God is not ashamed to be called their God, for he has prepared a city for them. Hebrews 11:13-16 (NIV)
Horses appear to be strong, independent creatures. Quite the opposite, as herd animals, they are healthiest when they have a least one other horse around them. That is why when I moved Trucker home, I invited his friend Indy to come along. They are great buddies and keep each other secure. The problem is that Indy has a very active social life. He is on a drill team and goes to weekly practices, He often camps and trail rides on the weekends. He also must make periodic trips several hours away to have his feet trimmed. I knew that Trucker could be upset on the days when Indy left, and he had to stay at home. As predicted, when the big red trailer showed up to take Indy to the farrier for the first time since the move, both he and Trucker became agitated. They called to each other as Indy pulled out of the driveway. All day long, Trucker waited for his friend to return. When I let him out of his stall, he ran in circles around the pasture, galloping as hard as he could go, and I was afraid that he would jump over the fence. As long as he was in his stall, he was fairly calm. Occasionally, he would whinny and stick his nose high in the air sniffing for his friend’s scent. He mostly stayed facing the direction of the driveway, hoping to catch a glimpse of his friend, I am sure. I tried several times to distract him from his focus. I took him into the round pen for some training, gave him hay, hosed him down, invited visitors over, and took him for a walk. I pulled up a chair outside his stall to listen to a Beth Moore study, but even her impassioned teaching of the Bible did not settle him down. All day long, he waited for the return of the trailer and the sound of his friend’s voice. It was not until Indy finally returned, that Trucker truly relaxed. All day, Trucker’s eager hopefulness reminded me of these verses. Hebrews 11 is often called the roll call of faith as it tells of Old Testament characters that believed in God and His promises even though many of them would not be fulfilled for thousands of years. They longed for a heavenly home despite the fact that in their day no one had a belief in the resurrection. They knew that, someday, they would spend eternity with God. What about you? Are you longing for a heavenly home? Trucker could not be distracted from his focus. He knew sometime his friend would return. Jesus made us the same promise. We don’t know where or when, but we will go Home as well. Don’t allow the things of this world to keep you preoccupied. Both pleasures and problems will eventually fade. We are aliens in this land. Only the things of eternity will last. Are you longing for your heavenly home?