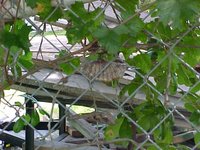 Horses are not only destructive but also prone to get into trouble. Wherever you don’t expect them, they will go. The first week after I moved Trucker to his previous barn, he wandered into a clump of oak trees, cut his eye and had to have stitches to keep the wound closed. Before letting them out, I walked the entire pasture searching for places where they might get hurt. I looked for low branches, buried wire, broken fence, drain holes, pieces of boards, nails, staples, plastic, all possible instruments of harm. As I got near to the fence, I bent down to pick up a piece of PVC irrigation pipe and suddenly found myself under attack. Like heat seeking missiles, an army of wasps flew at me with incredible force, and at least one, stung me on my forehead. It happened so fast, and somewhere in the fray, I knocked my glasses off into the dirt. I am blind as a bat without them, so with help, I managed to retrieve them without crushing them or getting stung again. My forehead burned red hot, and the excruciating pain felt like a million tiny needles inserted into my head. I immediately went inside to take an antihistamine and put some cream on my head. All day long, it hurt and throbbed. The area above my eye got puffy. But, I won’t have to worry about getting bit by those wasps again, nor will my horse. After doctoring myself up, I went in search of that wasp nest. It was attached to the chain link fence and hidden under some vines, but it was large enough to spot even with just one good eye. If I had not been bending down as I approached it the first time, I probably would have saved myself a lot of agony. Standing a safe distance away and armed with a can of wasp spray, I eliminated that angry horde. They were no match for the pesticide and quickly dropped to their death. While I have to deal with the consequences of their bite, I outlasted them. It made me think of this verse in Genesis, which is a prophecy of how Jesus will overcome Satan and death. While God allowed Satan to manipulate events in Christ’s life to bring Him to the cross and death, Jesus Christ overcame that enemy and rose from the grave. At the end of time, there will be a final battle, but again, Christ will triumph and Satan will be thrown into the lake of fire. As Christians, Satan, again with God’ permission, bothers and annoys us. He attacks us or those we love. He causes us emotional and physical pain, even to the point of death. In the end, while, Satan may sting, those of us who are in Christ will overcome, as well. When in discomfort or in pain, remember, this will pass. Christ reigns supreme. Satan will get what is coming to him. Just like those wasps.