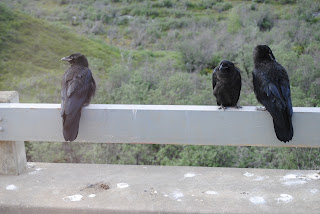 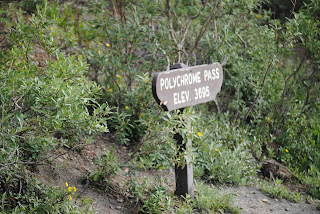 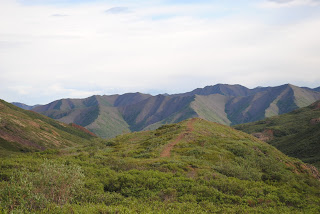 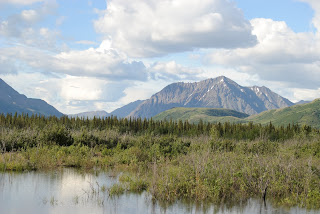 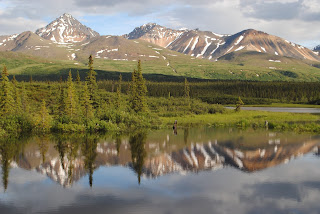 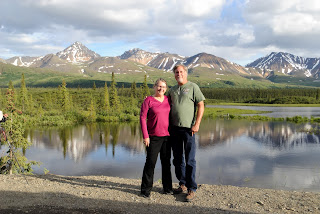 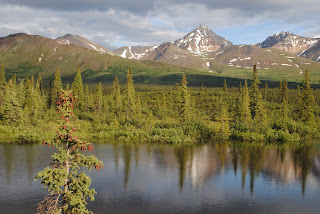 For it is you who light my lamp; the Lord my God lightens my darkness.  Psalm 18:28

If we ever get to Denali National Park again, we will stay longer than a day.    The park is over 6 million acres (9462 square miles), and can’t be seen all at once!  We thought we would have three days in Denali, but after taking the train from Anchorage and knowing that we would spend another day on the bus to Seward, we only had 36 hours in Denali.  But, we made the best of those 36 hours!  On that middle day, we took the “tundra tour” on a converted school bus with an excellent guide named, Peter.  Peter is a full time resident of Alaska, having driven the tundra tour buses for 22 years.  In the winter, he is a substitute teacher.  From his tour spiel and from our conversations, I suspect he is also a philosopher, spending many of those dark winter days reading and thinking.    Peter told us many things about the animals, geology, plants and operations of the park.  His stories were fascinating and always appropriate for whatever we were seeing out the bus windows.  We stopped periodically to get out of the bus, stretch our legs and take some photographs of the beautiful panorama that surrounded us.  We saw five grizzly bear (three of those, a mother and two frolicking cubs), two wolves, two herds of caribou, artic ground squirrels, a ptarmigan (the state bird of Alaska), three young ravens, some sea gulls and eagles.  We also learned how glaciers form and change the landscape as they melt and travel.  Because we were blessed with a sunny day, periodically, Mount Denali (formerly called Mount McKinley) peaked through and we were able to get photographs of it as well.  Most interesting to me, was Peter’s commentary on the dark days of winter.  He told about the negative effects of 24 hours of night such as alcoholism, drug addiction and suicide, but then, he made an interesting comment.  He said, “We all get the same amount of daylight, but some of us get it all at once.”  Turning that around, we all get the same amount of darkness, but some of us get it all at once.  While Peter talked about literal darkness when the sun does not shine at all, I thought of darkness as times of difficulty, sorrow or troubles.  In this world, we all have troubles, but Jesus came to bring us peace and joy even in the midst of that hardship.  “Light in the midst of darkness that is only found in Him.”  Peter also talked about seeing the northern lights and incredible displays of stars in the winter.  Without the sun’s light, the dimmer lights that are always there can shine brilliantly.  Something to think about when it appears that darkness will overtake us.