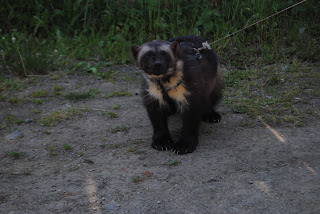 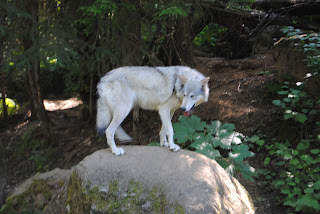 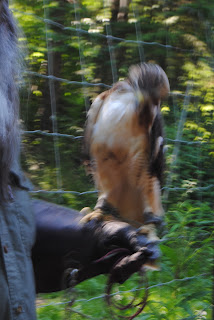 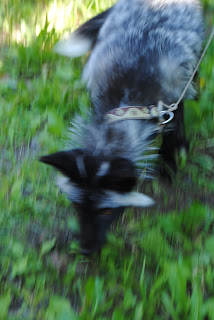 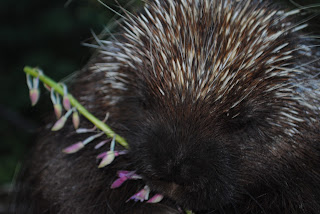 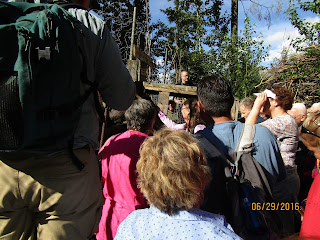 One morning, we woke up to find our ship docked in the tiny town of Haines, Alaska.  Once an army post, there were white painted wooden historic homes in a line up on the hill overlooking the town that used to house officers.  Another larger barracks, also white painted wood, was closer to the sea.  Later, we discovered that these buildings had been turned into art galleries and shops.  We spent the morning wandering around the town that included a museum with the “world’s largest collection of hammers.”  In the afternoon, we visited the Kroshel Refuge for Orphaned Animals.  Steve Kroshel, who makes documentaries for National Geographic along with a man who is also a filmmaker named Mario took us though the refuge.  Steve was zany and high energy while Mario was more scientific and calm and they made a great combination for educating us about the animals and their environment.  The path through the enclosures was steep and rugged, but with the help of a cane, I made it through.  We started with a wolf named Isis and got to hear her howl, then, moved on to see fox, one silver and one red, mink, wolverine, porcupines, lynx, caribou, reindeer, a grizzly bear, and moose.  Some of the animals, we could touch and some, we could not, like the wolverine.  The wolverine was very ferocious looking with sharp claws and teeth.  Yet, he trusted Steve enough to climb up on a tree branch next to Steve and pose for pictures.   It was a wonderful experience.  I kissed a moose, (putting a carrot in my mouth so that the moose would come down and take it-moose are sloppy kissers), petted the porcupine (fell in love with Lily who ate purple flowers and modelled for the camera), and petted other animals like the fox, mink and reindeer (did you know a reindeer’s antlers are black and feel like velvet?).   There was also a baby moose whose mother and sibling had been killed by a Grizzly Bear.  The bear attacked this baby, but did not kill it and left it to die (perhaps planning to come back and eat it later).  Instead, the baby moose was rescued and brought to Kroshel’s where they were bottle feeding it, tending its wounds and hoping it would survive its ordeal.   I hope so too.  Steve and Mario’s tender care of these animals reminded me of Jesus’ comments above.  He was speaking about his impending death and the fact that He would send the Holy Spirit to comfort and to guide us.  I am glad that Steve and Mario have made it their life’s work to care for these orphaned animals as well.