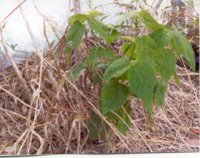 Therefore He says: “ Awake, you who sleep, Arise from the dead, And Christ will give you light.” Ephesians 5:14 (NKJV)
A year ago, on vacation, I spied a beautiful flowering plant at a garden center in the town where we were staying. These large plants had red, burgundy, hot pink or pale pink blooms the size of dinner plates. They appeared to be a tropical hibiscus, but the owner of the store told me that they were mallows. Before leaving town, quite on impulse, I bought six of the plants in various colors. I kept two plants and gave the rest to friends and family. My two mallows were actually four separate plants; there were two in each pot, so I was able to keep samples of all four colors. I planted them outside my kitchen door where they bloomed and grew creating quite a show for everyone to see. Then, one day a few months later, they abruptly died. They dwindled down to nothing but a few bare brown sticks that were hollow in the middle. I thought perhaps I had over fertilized them and was so disappointed that I might have done something wrong. I felt a little better when I discovered that the plants I had given away had also died. We all agreed that mallow must not grow in our area, but I was still depressed that I would never see those beautiful flowers again. Later, I went back to the town where I had purchased them to see if they might have more, but they did not. In my despair, I just turned my head and tried to ignore the flowerbed. I could not even bring myself to weed it or pull the dead branches up. After almost a year, the area became so overgrown that I finally decided to apply an herbicide and kill the whole mess. Before, I could do so, I was shocked to see green leaves appear at the base of the dead limbs of one of the bushes. A few days later, the other bush also had green leaves. At first, I thought that it was a different plant coming up in the same area, but soon realized that in fact, the mallows were not dead, but alive and growing again. It was not long before one bush sported a bright burgundy flower. Then, I received a call, a friend had left her “dead” mallow plants alone and they were also blooming again! Other friends who had tidied their gardens long before were sad to discover that had they left their mallow plants alone, they would have recovered. For almost a year, those mallows sat bare and empty. Then, suddenly they sprang forth with beautiful flowers. How many of us are moving through this life as sleepwalkers? Our hearts are dead and unfulfilled. We miss the peace and freedom that only God can bring. Christ came to give us life, not death. Awake, you who sleep! Let Christ shine in your life and experience the joy that only He can give. He can make even the bleakest life glow again.