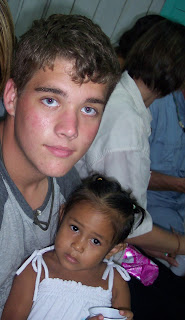 Though its waters roar and foam and the mountains quake with their surging. Selah. There is a river whose streams make glad the city of God, the holy place where the Most High dwells. God is within her, she will not fall; God will help her at break of day. Psalm 46:3-5 (NIV)

Youngest son is home from his mission trip to the Amazon. He brought back some souvenirs and lots of pictures and stories, but more importantly, he returned with an enthusiasm for helping the Brazilian people, particularly the children. When he left, he was excited about seeing the rainforest and an adventurous river trip. He took a big knife and fancied himself a young Indiana Jones. Yet, upon his return, when we asked him what his favorite part of the trip was, it was not the jungle or the water that caught his attention. Instead, he replied, “Playing with the children.” His newfound love for them is evidenced by the pictures he took. There is one of him cuddling on his lap a little girl about two years old. Another of him horsing around with two young boys. He played soccer with all of the children, distributed the many small balls that he brought and left behind the sports equipment. In some photos, he is shown teaching Bible stories and helping the children act them out. He laughed when he displayed the picture of his students wrapping a child in first aid bandages while he told the story of the Good Samaritan. Several pictures show him using his limited first aid supplies to treat infected sores caused by bites and scrapes allowed to fester in a wet environment. He expressed regret that he could not do more. Children lined up for his attention, and he ran out of bandages and antibiotic cream before being able to help them all. One set of pictures he particularly prizes. In them, a young girl with two club feet stands leaning against a friend for support. “We are going to get her here to the States so her feet can be operated on,” he said confidently. He was eager to tell me about his week. I sat in amazement and listened. All my questions were answered. I heard how he had diarrhea the whole time because of something he ate. He said the food was not all that good, but that he didn’t go hungry. He quit taking his malaria pills because they made him sick. He swam in the Amazon and caught a crocodile. I learned about the trees and the animals, the snakes and spiders. But mostly, I heard about the children and their needs. He wants to go back next summer for a longer period of time. He knows he needs to take more medical supplies and learn some advanced first aid skills. He wants to help. The hardships of the trip did not faze him. Illness. Lost luggage and supplies. Poor food. Contaminated water. Harsh conditions. Broken equipment. They were not problems for him. Only hurdles to jump over to get to his real goal. Helping the children. When he was born, God promised me that youngest son would grow up to be a great man of God. He is only seventeen, but I see that promise has already been fulfilled.