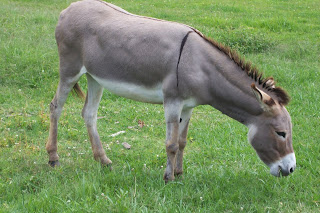 Brothers, think of what you were when you were called. Not many of you were wise by human standards; not many were influential; not many were of noble birth. But God chose the foolish things of the world to shame the wise; God chose the weak things of the world to shame the strong. He chose the lowly things of this world and the despised things—and the things that are not—to nullify the things that are, so that no one may boast before him. It is because of him that you are in Christ Jesus, who has become for us wisdom from God—that is, our righteousness, holiness and redemption. Therefore, as it is written: “Let him who boasts boast in the Lord.” 1 Corinthians 1:26-31 (NIV)

In Ferron, Virginia is a historical farm located on the campus of Ferron College. It depicts a typical early nineteen century German-American farm. Due to the heat, we were the only visitors, but our tour guide gamely left the air conditioning to show us around. A covered porch separated the two story log house from the kitchen. With a fireplace for cooking, the kitchen got quite hot and detaching it from the main house kept the house cooler. A smokehouse, bake oven and blacksmith shop surrounded the house. We also viewed the gardens which were just about done for the season, but a few products, watermelon, garlic and potatoes awaited harvest. What would a farm be without animals? While most of the animals were out to pasture for the summer, we saw a herd of sheep and met their guardian, Clara. Now, Clara is not a watchdog, Clara is a watch donkey. A few years before some dogs killed several of the sheep, and Clara was brought in to sound the alarm and chase away intruders. We fell in love with Clara and her soft floppy ears and loud bray. She wanted to be the center of attention and would not leave us alone until our tour guide brought out a bucket of grain, and we all took turns feeding her. After her snack, every time she saw us come close to her pen, she called to us reminding us of her presence. Clara made me think about a quote by Corrie Ten Boom. Corrie Ten Boom was a Dutch woman who helped to rescue Jews in her homeland during World War II. Because of her work, she was sent to a German prisoner of war camp where she and her sister suffered horribly. Corrie lived to tell about how God ministered to her in the dark time. Years later, after the war, in a testimony to the powerful work of God in her life, she met one of the prison camp guards and forgave him for his actions towards her. Once, when she received an award, a reporter asked how she remained so humble in the face of such prestige. She replied, “Young man, when Jesus Christ rode into Jerusalem on Palm Sunday on the back of a donkey, and everyone was waving palm branches and throwing garments in the road and singing praises, do you think that for one moment it ever entered the head of that donkey that any of that was for him?” She continued, “If I can be the donkey on which Jesus Christ rides in his glory, I give him all the praise and all the honor.” I get full of myself sometimes and more than once, have patted myself on the back for some good thing I have done. In the long run, though, while Clara’s braying and attention seeking were cute, I would rather be more like that unnamed humble donkey upon which Jesus rode and give the glory to God.