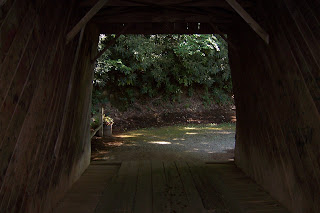 The people walking in darkness have seen a great light; on those living in the land of the shadow of death a light has dawned. Isaiah 9:2 (NIV)

In the blogging world, there are all kinds of opportunities to participate in “community” activities. Challenges to post photographs or write on certain topics or themes make this large, isolated world of blogging more intimate and connected. I have never taken part in any of these, but today, several of the blogs I read regularly are doing a photo hunt on the theme of dark. I decided to join in the fun. This picture was taken while we were on vacation in Woolwine, Virginia at the Bob White Covered Bridge. Woolwine is in the south western part of Virginia in Patrick County, and there are several covered bridges in this area. When new bridges were built, the people in Patrick County decided to preserve them, sometimes by moving them to a new location, and now, they are tourist attractions. This particular bridge was just down the road from the cabin where we stayed. It was built by a church congregation so its members could get to services without having to ford the Smith River. We traveled to several others as well including the Jack’s Creek Bridge and enjoyed taking pictures of the guys riding their motorcycles through them. (Although maybe I should not say that on the Internet since I think they are all restricted to foot traffic these days.) We learned that covered bridges were constructed before communities had the modern engineering and materials that are used in bridge construction today. The framework that makes up the cover supports the bridge. Even without metal or concrete, these old bridges have survived the test of time. Unfortunately, many of them have been vandalized with graffiti. I suppose people think that they too will be immortalized if they leave their name and a message in that way, but it was sad to see. Walking under the cover of the bridge, it takes a few seconds to get used to the darkness. While you can see the light on the other opening and there is light behind you, the inside of the bridge is dim. I thought about the countless numbers of people who have taken refuge inside its walls. How many horses and buggies waited there for a storm to pass before emerging into the sunlight on the other side? Despite the rush of the water underneath them, they crossed the river safely. For them, the covered bridge was not an oddity to photograph, but a necessity of life. The bridge and this photograph make me think of Jesus Christ who came to be the bridge between humanity and God. He is the light to help us see the way to heaven. Without Him, we are destined to live in darkness forever, but in Him, we no longer fear the shadow of death. He gives us immortality. Our names are not written on the interior of a bridge but in the Lamb’s book of life. Want to cross from darkness to light? Look to Jesus, He is the way.