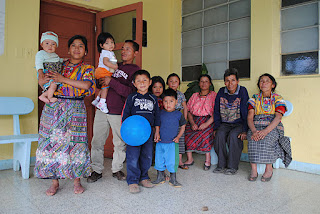 “But who am I, and who are my people, that we should be able to give as generously as this? Everything comes from you, and we have given you only what comes from your hand. We are aliens and strangers in your sight, as were all our forefathers. Our days on earth are like a shadow, without hope. O LORD our God, as for all this abundance that we have provided for building you a temple for your Holy Name, it comes from your hand, and all of it belongs to you. I Chronicles 29:14-16 (NV)

I had a dream on Friday night that was so vivid I woke with my heart pounding in fear. I dreamed I was alone in my hotel room in Guatemala, but it was dark. I could hear my teammates walking down the hall to get on the bus to return home. I couldn’t see to finish packing and find my passport. I heard the bus drive away and knew I was all alone with no way to get back home. Since I was awake, I got up and went early to my friends’ house to help with the Sunday School class yard sale. We are back raising money for mission trips again. The yard sales are also about raising awareness. We have a bulletin board with pictures of Guatemala and the children to share. Several Guatemalan families came to the yard sale, and they were transfixed by the photos. They pointed out the women in native dress, the countryside and the sweet faces of the children. One father told me that his teenage daughter had no idea how good life was in the United States. He said he wished she knew but then, he was so grateful that she didn’t. Another woman began to cry when she saw the pictures. She did not speak English but her husband told me that she misses her homeland very much. He shook his head sadly. “She cannot go back,” he said. “She will not be allowed to return to the United States.” I realized that she might be an illegal alien and felt sad for her. I have been thinking a lot about the plight of those undocumented workers since returning from Guatemala. This is not a political blog, and I do not intend to start an argument or debate, but I can’t help but think that we as a country are making some poor decisions about immigration. Yes, I know there are a lot of Americans out of work, but honestly, how many Americans do you know who want to pick beans for less than minimum wage? How many Americans do you know who will work all day on a landscape crew in the sun for the privilege of being here in America? While in Guatemala, I heard the story of one of the children who had gone home since I was there in January. The money provided by an uncle living in Florida working illegally and sending most of his wages back to his family in Guatemala allowed her to return to her family. These people leave their county knowing that they will most likely never go back. One man I talked to at the yard sale had been in the United States for twenty-two years. His grandmother is now 83 years old and he longs to see her again before she dies. But, he is not able to leave. I remembered my dream where I was in the dark and couldn’t go home. I can’t imagine what that must be like.