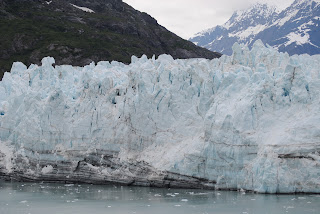 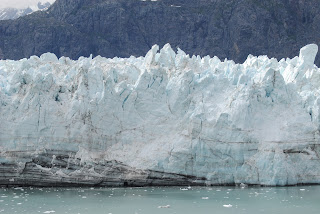 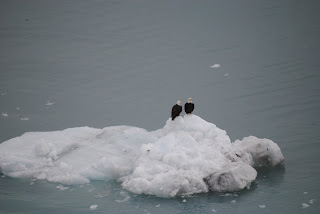 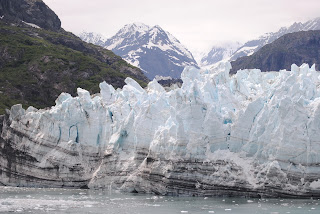 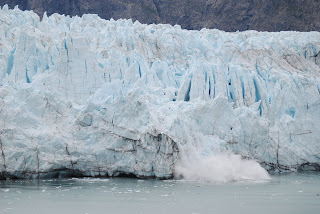 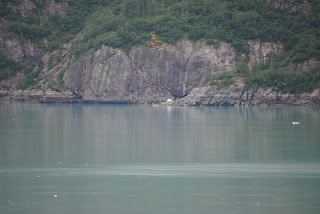 Weeping may tarry for the night, but joy comes with the morning.  Psalm 30:5

The morning our ship entered Glacier Bay, the winds quit, the seas calmed and we jumped out of bed, ready to begin our day.  The sun comes out at 4:00 AM in Alaska so no matter how early you rise, it is light enough to sit on your balcony and take pictures. (The sun goes down about midnight, but it never really gets dark, more of a twilight look to the sky)  The entrance to Glacier Bay National Park is surprisingly green with trees and vegetation.  We learned that as the glaciers move closer to the water, they drag down silt and rocks with them.  As the ice melts, lichen take over the rocks growing in the silt.  After many years, the lichen decompose and moss begins to grow.  Wildflowers and trees take root in the moss and eventually, a rain forest emerges in the one rocky and brown place.    As I admired the scenery, a pair of rust colored hummingbirds flew up to our balcony and hovered in front of me.  They were close enough that I could have reached out and touched them.  Before I could focus my camera, they flitted off to the front of the boat.  They came back a second time, then, raced to the back of the boat before visiting me one final time.  I never did get their photograph, but did manage to get husband’s attention, too so that I had another witness.  I was convinced that this visit held special meaning for me, perhaps it was even a message from God.  I carried the memory with me all day, trying to figure out what it might mean.  Later, I asked the park ranger who had boarded our boat to interpret the nature and the glacier.  After describing them to her, she said that they were Rufous Hummingbirds and that Glacier Bay was as far north as they travelled and it was rare to see them from the cruise ship.  We guessed that they were attracted to the bright pink sweatshirt that I wore, but her comments confirmed that it was an unusual encounter.  I expected to see whales and seals, but not a hummingbird, much less a pair!  After doing some research, I discovered that the Native Americans believed hummingbirds to be a symbol of joy and it is said that a hummingbird if a reminder to enjoy the present, not to worry about the past and the future.  Because I had resolved to do just that on this trip, it seems appropriate that hummingbirds would come to visit me flying over glaciers and far from their usual range.  What a remarkable reminder to look for the joy in everyday things and not to obsess over our schedule!